Last week in Sunday School, I taught my students the story of Balaam’s donkey. In this story, the king of Moab asked Balaam to curse God’s people. As a prophet of God, it would not have been a good thing for Balaam to have cursed God’s own people, but the king was offering a fat paycheck for Balaam’s service. Balaam knows it is the wrong thing to do, but he sets off with his trusty donkey to talk to the king, and the assumption is that he intends to take the money and curse God’s people.

As Balaam was traveling to see the king about this request, and God sent an angel who stood in the roadway, scaring the wits out of poor Balaam’s donkey. The donkey first walked off the road, then lay down in the middle of the road– wanting to do anything but cross the angel standing in the path. Balaam couldn’t see the angel, didn’t understand the donkey’s behavior, and responded by beating the poor animal. He basically threw a hissy fit because his plans were being changed and he didn’t want to adapt. The story ends with the donkey receiving the gift of speech, so he could explain his behavior, and Balaam’s eyes were opened to see the angel standing in their path. Balaam realizes that he was on the path to sure destruction, and his donkey’s behavior was protecting him. The lesson, I explained to my class, was that sometimes our plans are blocked by situations we don’t understand, and sometimes it is God blocking our path to keep us in His path and not on our own path.

I thought about this story as I prepared for hosting Thanksgiving this week. This year, for the only the second time ever, I hosted Thanksgiving. Originally I was not pleased to have my traditional Thanksgiving changed. But it turned out to be very nice. 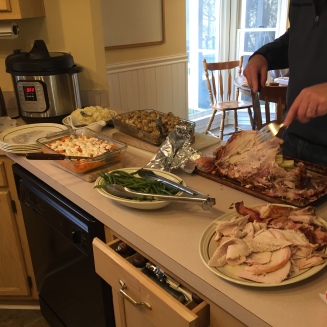 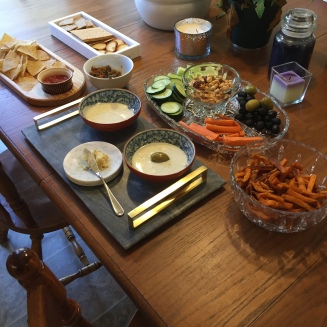 Thanksgiving is about more than just the food. It is about family and getting together. It is about life and love and surviving another year and being thankful for everything that happened in that year. Normally, my family’s Thanksgiving is loud and messy. We gather at my parents’ house — 3 children, a couple sons-in-law, 9 grandchildren, a few dogs and significant others, and most recently a great-grandbaby to enjoy. It is a giant slumber party, with football at the local elementary school fields, and long walks and talks, football on TV, jigsaw puzzles in the living room. And of course, my mom’s cooking. I love it.

But this year is different. We aren’t having our normal, crazy family Thanksgiving at my parents’ house. My sister will be with her family. Only two of my four children can come this year. My parents are staying at their house with my brother and his family. It will be quiet, less stressful for sure — different.

My mom says that change has to happen, that it is the normal way of things. But to be fair, I don’t like any change anyway. I’m quite change-averse. I set out on my path, like Balaam in the Bible story, and I get very frustrated when something makes me change my plans. I have spent the last few weeks being upset that Thanksgiving is different this year.

But as the day arrived, I realize how much good is in this change. I was relaxed with no long drive to mom’s house, no packing of the dogs, making sure Sugar got her car-sick medicine an hour before we left. As much as I love my mom’s house and her wonderful kitchen and greenhouse to just sit in, it was nice to enjoy extended time in my own home. It was fun to watch Taylor setting out her pre-dinner snacks and to get out serving dishes that are rarely used. We were able to include a friend who didn’t have any place to go, and Taylor’s boyfriend was able to work and enjoy family Thanksgiving. And I got to watch Moana for the first time, while lying on my favorite Lazy-Boy chair under a cozy blanket.

I still don’t like change, but I’m trying to embrace it. Change can be good.